Do you have a Thoroughly Modern Workplace?

Do you have a Thoroughly Modern Workplace? 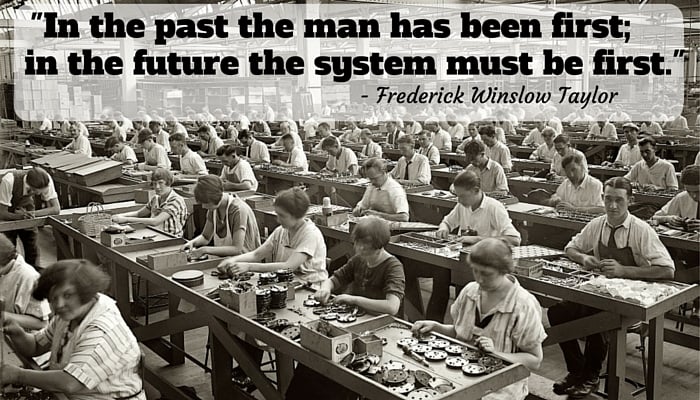 Back in the late 1800’s, Taylor was a pioneer of sorts.  As the son of a wealthy family, he could have done almost anything, but he found himself drawn to working in a factory…starting on the factory floor instead of going to Harvard or some other big name school. It turns out Frederick Taylor had a fascination, almost an obsession with work and efficiency.  And in the late 1800’s factories were more efficient than making something by hand on your own (but not by much…!).

Taylor’s calling had him doing detailed research and experiments with his factory co-workers (eventually with the approval of the factory manager).  He would do time studies to figure out how long tasks should take (vs. what they were actually taking) and he would study the overall efficiency of the factory – looking at it like an engine he could improve. One of the first things he realized was that the best way to improve the overall output of the factory, was to improve how the workers worked. In his opinion they were mostly a lazy, untrustworthy lot and they had to be actively managed if you wanted to get anything out of them.

Here are a few of the ideas he implemented (pioneered):

Taylor likely wasn’t the most fun at parties, but he did have significant impact – at Midvale Steel Company he doubled the machinist’s output. At Bethlehem Steel Works he shrank the number of employees from 500 to 140 without any drop in production…!  He went on to write ‘The Principles of Scientific Management’ in 1911 which became the foundation for much of the Industrial Revolution and modern manufacturing techniques and principles.

Somewhere along the way (certainly in the last 20 to 30 years), many of the ideas that started with Taylor stopped working in the modern workplace.  Most of today’s workplaces don’t need employees who can and will only do 1 or 2 things repetitively – we’ve got actual robots and computers for most of that work.  But there’s a problem – despite the world changing, many of today’s management conventions are still modeled after techniques that worked great in the 1930’s and 40’s.  Here are a few examples:

Consider the use of time clocks…and the standard work day (9 to 5). In a factory setting way back when, that made perfect sense because you needed to optimize the factory output in order to make a profit.  Today most work can be done from anywhere and with a lot of flexibility on time. Recent studies have repeatedly shown a significant increase in motivation and engagement when people are given autonomy on how and when they do their work.

How many employees would love to work somewhere where they had control over when and where they did their work?

Likewise think about micro-managing and focused, purposely mindless tasks. Way back when a lot of the work was boring and repetitive; you needed a manager or supervisor watching over the workers like a hawk just to keep them doing the work they likely hated.  Most businesses today require employees who can think on their feet, who can display creativity and problem solving. Managers should be leading, innovating and focusing on the big picture, not trying to micro-manage the staff.

How much more quality could you get if you had a team that was constantly pushing you with new, great ideas and better ways to get things done?

Finally – think about compensation strategies and the idea that money is the only motivation for most workers. Numerous studies have shown that paying for performance does work – but only up to a point and only in work environments where creativity and thinking aren’t required (in other words, mindless physical tasks). For most of today’s jobs, motivation is intrinsic to the employees either because they inherently buy into the bigger purpose or mission of the business, because they want to master a skill or because they have the autonomy to do things in their own way. Engaged, intrinsically motivated employees outperform non-engaged employees by 31% on average…!

Are your employees internally or externally motivated? What would it take to get them engaged and excited about work?

Frederick Taylor made a huge impact on the workplace (and society) but isn’t it time we moved on from Industrial Revolution era ideas? When you look at your workplace, what do you see? Are there things you could improve on?  We’d love to hear your thoughts in the comments below.