An MTP for Your ExO? Wait… what? 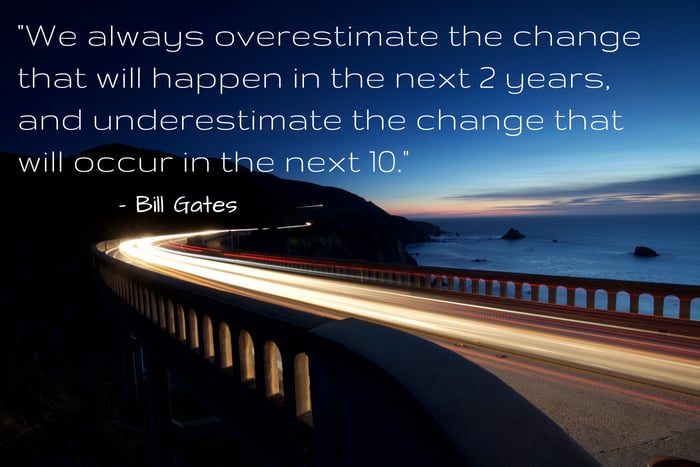 The world has changed immensely in the last 20 years.  Think about it this way – in September of 1998, 20 years ago, 2 guys with laptops founded Google.  They reached a $1 Billion market capitalization in about 8 years and Google is currently worth over $700 Billion…!

To put that in perspective – historically Fortune 500 companies take 20 years to get to a $1 Billion market cap… and Google’s size, as of last year, makes them equivalent to the 19th largest country on the planet!  In less than 20 years.

Of course, Google’s not alone in terms of amazing growth – Facebook, Tesla, Uber, Snapchat and many others reached the $1 Billion valuation mark even faster than Google.  Author Salim Ismail was intrigued by the trend of hyper-growth and decided to study it, specifically looking at 100+ companies who have demonstrated at least 10X the impact and growth potential as compared to other companies in their industries.  He calls these companies Exponential Organizations – or ExO’s for short and he wrote about what he learned in his book Exponential Organizations.

It turns out that these high-growth companies have in common 11 specific attributes that enable this kind of disruptive growth.  The Growth Institute has a great summary article (and video if that’s more your thing) also written by Salim Ismail that does a nice job of explaining the big ideas:  11 Secrets you need to know for Exponential Growth.  Here’s an illustration from that article that will at least give you a pretty good feel for the attributes: 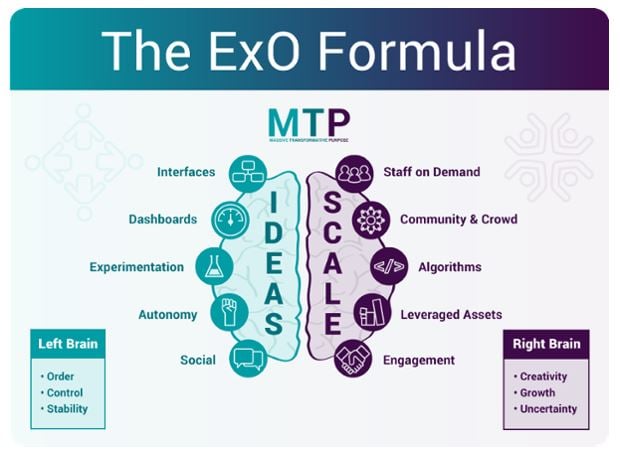 The 5 attributes on the left are concepts that are internal to an organization (behaviors, tools, etc.) and the 5 on the right are external resources and ideas.  Based on the research a company only needs to have 3 or 4 of these attributes implemented to achieve exponential growth (more is better, but 3 or 4 will make a huge impact).

However, there is one attribute that is foundational to the overall concept – that’s the idea of having an MTP – a Massive Transformative Purpose for your company if you want to be able to scale 10X (or more) quickly than everyone else.

What is an MTP?   You can think of it as a highly aspirational tagline.  The concept is simple – it’s a short, emotional, simple statement that tells the world why your organization exists.  Here are some examples that you’re probably familiar with:

Uber – The best way to get where ever  you’re going

Coca-Cola – Refresh the world and inspire moments of optimism

A couple of things to notice about the definition and the examples – by definition, these companies are shooting for something that’s Massive – think back to Jim Collins concept of a BHAG: Big Hairy Audacious Goal.  Something that takes your breath away.

These are also intended to be Transformative – something that can fundamentally change the world (or at least some part of it).

And finally, these are intended to be a Purpose – something that taps into your ‘why’, something that’s bigger than any one person and leads to somehow making the world a better place.

The idea of an MTP is a fairly simple one, but coming up with an effective one obviously isn’t easy. Here’s a more tangible example that might resonate with you:

Boston Children’s Hospital’s MTP is ‘Until every child is well’.

Think about how that idea drives all of the different aspects of the hospital.  How that simple statement unites all of the key stakeholders – employees, suppliers, donors, even patients.  It sets a clear direction and, for the right people, a huge motivation to help figure out how to achieve that kind of outcome.

You can definitely see how an effective MTP could dramatically impact an organization.  But how does this play with a typical small business?

An MTP and a typical small business?

I love the idea of an MTP and I’m fascinated by the business aspects of Exponential Organizations, but let’s face it there are over 27 Million small businesses in the US and a huge percentage of those aren’t looking to be Massive or Transformative (at least not on the scale of many of the examples that we’ve mentioned).

However that doesn’t mean this concept isn’t important – especially the purpose component.  People want to be part of something, they want to belong to a group that stands for an ideal, they want to know where you’re heading with your company.  You may not need all of the rigor and audacity of an MTP, but everyone would benefit from having more purpose in their life.

There’s a good chance that your business started because you saw a way to make money and it was something you were good at (or could do).  That’s fantastic, solving a problem people will pay for is always a great foundation for a business.  But can you take it a step farther?  If you’re solving a problem, is it one that you (or others) can get excited about?  Are you helping (directly or indirectly) a group of people?  Are you enabling someone else to succeed in some way?

When’s the last time you thought about the Purpose of your business?  Would you agree that having a purpose clearly stated would help you attract the right people and strategically steer your company forward?

I’d love to hear your thoughts – is this an idea that applies to any business?  Or does this just apply to Silicon Valley Unicorns?